How to Level & Crown 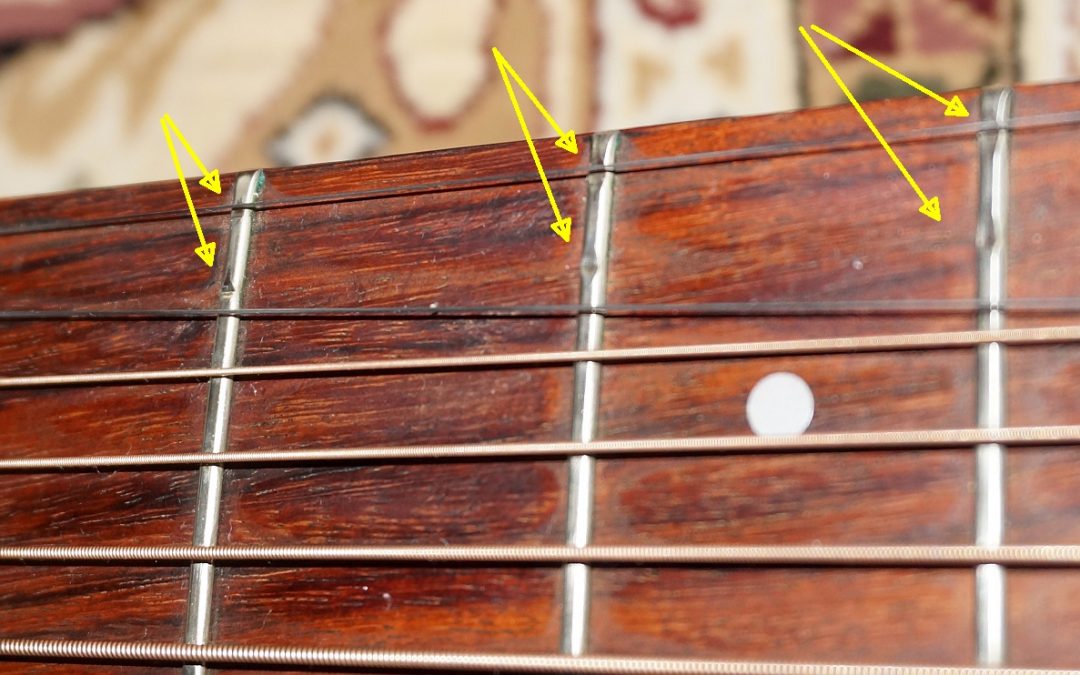 What IS Level & Crown?

Level & crown is (as you may have guessed!) a two-step process. First, frets are leveled, usually to the lowest wear point, and then the crown of each fret (curved top) is remade by filing.

When you get wear grooves or damage grooves in your frets, it not only creates a “rut” for the string to fall into when doing bends, but also can make this part of the fret a bit lower than the next higher (toward the bridge) fret. When that happens, the string can “buzz” or sound a bit “dead”.

You begin the fret leveling process by marking the tops of all frets with a marking pen. Then, as you’re leveling (filing) frets, you can see the grooved areas that remain.

In the above photo, we can see that there remains a few thousandths of an inch further to file before the last of the marks are gone.

Do you need to Level & Crown your frets?

When frets are new, as you’re playing and fretting strings, each string will hit the fret at a slightly different spot each time – perhaps varying as much as 0.010″ to either side.

But what happens once you start getting some wear? First, the fret top flattens a bit so that instead of a rounded top (crown), the string has a surface to contact on the far side of the fret center. This can result in buzzing and/or loss of tone.

Also, the once smoothly polished fret is now full of tiny scratches. Like sandpaper, a rough surface wears faster than a smooth surface.

Next, you begin to get some “U-shape” areas in your frets. Now, instead of wear being spread across 0.020″ of fret, all the wear is happening in the few thousandths of an inch at the bottom of that “U”.

Finally, the “U” changes to the very next letter of the alphabet – “V”. Now the wear is all happening at the one thousandth of an inch at the bottom of that “V”.

This means we’re likely wearing the fret 20 times faster than when it was new. Its life is near THE END!

A Level & Crown fret job done at the right time – preferably at the very beginning of the “U” stage – renews the frets and prolongs their life by quite a bit.

This type of fret damage is usually caused by something (table edge, etc.) striking a string against a fret. But incorrectly handling a guitar can also cause fret damage. For instance, picking up a guitar by gripping the fretboard firmly with your palm against the strings can cause damage (though not likely as severe as in the above photo unless you’ve been working out too much!)

What is the least fret height needed for level & crown?

I’ve heard the figure of 0.025″ tossed around as the minimum fret height AFTER a level & crown fret job. Like many measurements in the guitar tech world, this needs to be based on the player’s preference. Just know that things start getting a bit dicey below 0.030″.

If a guitar hasn’t been leveled & crowned before, most will have over 0.040″ of fret height. But you need to measure the lowest point of the lowest wear groove to know where you’ll be after leveling. That can be difficult without the correct tool. I like to use the Fret Guru tool for my level & crown jobs.

Should You Refret or Partial Refret?

If any frets will be left below 0.025″ in height, they should be replaced. If most frets are about equal in wear and some need replacing, it’s probably best to do a total refret.

However, if only one or a few frets are in bad shape and the rest still look pretty good, a level & crown job would take a big chunk out of the life of a majority of frets, just to get them to match the lowest areas of the few badly worn frets. That doesn’t make sense.

So, in these cases, it’s usually best to replace the few bad frets then level & crown to the heights of the remaining frets, rather than robbing the majority of frets of much of their lifespans.

Now let’s checkout the step-by-step process of how to level and crown guitar frets.. (Click next page)